10 Things You Should Know About Multiple Sclerosis 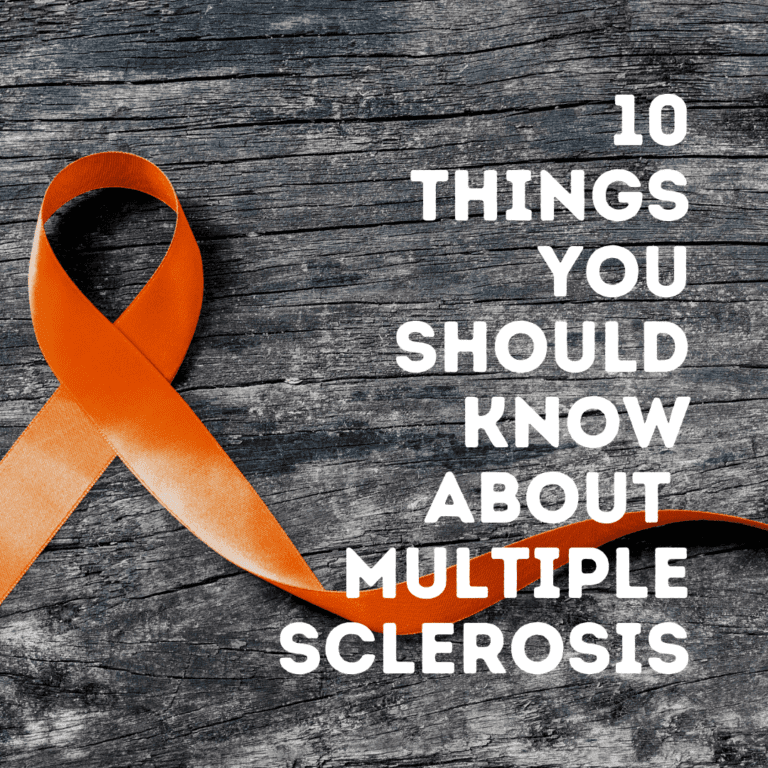 Did you know that March is Multiple Sclerosis (MS) Awareness Month? Almost 1 million Americans are affected by MS, however many people don’t know much about this disease. During the month of March, MS Awareness month looks to educate the general public about MS and provide support to those affected by this disease. MS is a chronic, often disabling disease that attacks the central nervous system. Symptoms can vary from person to person, and can range from mild to severe. In this blog post, we will discuss ten things that you should know about MS.

MS is a Chronic Condition

MS is a chronic condition, which means that it lasts for a long time and there is no cure. However, with treatment, many people with MS are able to live relatively normal lives. It is also important to note that most people with MS have a standard life expectancy and the disease is usually not fatal.

MS is a Silent Disease

MS is commonly referred to as a “silent disease” or “invisible illness”. One reason for this is because its symptoms may not be immediately visible to others. For example, chronic pain, blurred vision, and sensory problems are only experienced by the individual with MS, and cannot be easily noticed by others. The second reason why MS is known as a silent disease is because the disease is always progressing, even during periods of remission when there are no symptoms.

In addition to the physical symptoms of MS, many people also experience cognitive symptoms such as problems with memory, attention, and concentration. This can make everyday tasks very difficult and challenging. MS can also affect problem-solving skills and the ability to process where your body is located in space. Oftentimes, these cognitive challenges can lead to emotional reactions like frustration or depression.

As we mentioned earlier, the symptoms of MS can vary drastically from person to person. Some people might experience a few mild symptoms, while others might experience more severe symptoms. It’s important to remember that just because someone has MS, doesn’t mean they will have all the same symptoms. There are a variety of symptoms associated with MS, since the symptoms often depend upon the nerves being attacked by the immune system.

MS is Hard to Diagnose

MS is often hard to diagnose because its symptoms can be very similar to other diseases and because there is no single diagnostic test for MS. If you think you might have MS, it’s important to see a doctor who specializes in MS for a proper diagnosis. When making a diagnosis of MS, your doctor will generally perform a number of diagnostic procedures such as blood tests, neurological exams, magnetic resonance imaging (MRI), visual evoked potential (VEP) test, spinal fluid analysis, and/or an optical coherence tomography (OCT).

According to the National Multiple Sclerosis Society (NMSS), MS is most commonly diagnosed in people who are younger adults, usually between the ages of 20 and 50. MS is also three times more likely to affect women. However, MS can affect people of any age and gender. In cases where MS is diagnosed after the age of 50, it is generally known as late-onset MS.

People with MS can Relapse or Go Into Remission

Just like with any other chronic disease, people with MS can relapse or go into remission. A relapse is when the symptoms of MS become more severe, while remission is a period of time when the symptoms are less severe or hardly there. It’s important to keep in mind that there is no set pattern for relapses and remissions, so they can happen at any time. Periods of remission can vary in longevity and can last weeks, months, or even years. It is important to note that remissions do not mean you no longer have MS. You still have MS and the symptoms will return.

Vitamin D is a nutrient that is found in many foods, such as milk, eggs, salmon, tuna, and breakfast cereals. Sunlight is also a source of vitamin D and it’s also available as a supplement. There is some evidence that suggests that taking vitamin D can improve MS symptoms and lead to fewer relapses. The research shows that vitamin D deficiency can make MS more likely, which suggests that supplementing vitamin D may be able to help prevent the disease. However, more research is still needed to fully understand the relationship between vitamin D and MS.

There is some evidence that suggests that staying cool can help prevent the symptoms of MS from getting worse. This is because many people with MS have heat intolerance, meaning that heat can aggravate the symptoms of MS. Fevers, hot weather, sun exposure, hot showers or baths, and overheating from exercise can all cause a temporary spike in MS symptoms. Some ways to stay cool include staying in air conditioned rooms, drinking cold drinks, and using a cooling pad or pillow.

Rates of MS are higher further from the equator

According to the National Multiple Sclerosis Society (NMSS) rates of MS are higher the further away from the equator you get. For example, in the United States there are 110-140 cases per 100,000 people above the 37th parallel, but only 57-78 cases per 100,000 people below the 37th parallel. Worldwide, people in colder climates such as Northern Europeans, have higher rates of MS. This might be because people who live closer to the equator are exposed to more sunlight, which helps produce vitamin D, a known factor in preventing MS.

We hope that this blog post has helped to educate you about some of the things you should know about MS. If you have any questions, please don’t hesitate to reach out to us. And if you’re looking for support, we urge you to reach out to the National Multiple Sclerosis Society. They offer many resources and support groups for people living with MS and their families. Thanks for reading!