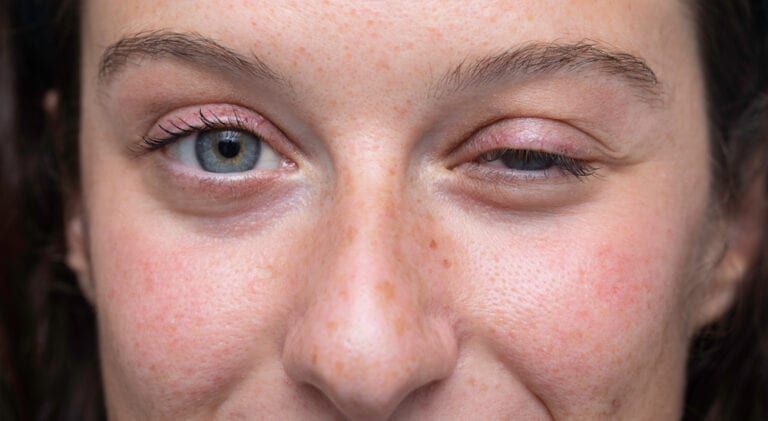 Myasthenia gravis is a chronic condition that causes muscles to tire and weaken easily. For example, if you have myasthenia gravis, you may notice that during a meal, your jaw muscles become tired and weak, interfering with your ability to chew food. After you have rested for a little while, the muscles may become strong again, allowing you to resume eating.

This waxing-and-waning weakness of muscles, worsening with use and improving with rest, is a hallmark of this particular disease. There typically are periods when you may notice more symptoms (called an exacerbation), interspersed with periods when symptoms decrease or disappear (remission).

The disease most commonly affects muscles that control eye and eyelid movement, so the first symptoms you notice may be eyelid drooping and/or blurred or doubled vision. The majority will go on to develop weakness in other muscle groups within one or two years.

Myasthenia gravis affecting multiple muscle groups throughout the body is called generalized myasthenia gravis. Other common muscle groups that are affected may make it difficult for you to chew, swallow, smile, shrug, lift your arm up, grip, rise to a stand, or walk up stairs. When the muscles necessary for breathing are affected, a patient is said to be in myasthenic crisis. This is a life-threatening situation.

Though anyone can develop myasthenia gravis, those most likely to do so are women between age 20 and 40 or men between age 50 and 70. If a woman with myasthenia gravis gives birth, the baby may have some temporary, and potentially life-threatening, muscle weakness (neonatal myasthenia) because of antibodies that have transferred from the mother’s bloodstream. Typically, during the baby’s first weeks of life, the antibodies are cleared from the baby’s circulation and the baby develops normal muscle tone and strength.

About 15% of all myasthenia gravis patients are found to have a thymoma, a tumor of the thymus. Although most thymomas are benign (not cancerous), the thymus is usually removed (thymectomy) to prevent the potential spread of cancer. In fact, thymectomy seems to improve symptoms of myasthenia gravis in some patients, even if no tumor is present.

The symptoms of myasthenia gravis include:

During a physical exam, your health care provider may observe signs such as a droopy eyelid, difficulty holding your arms out at shoulder length for a reasonable length of time, or a weak grasp. Blood tests may reveal the presence of acetylcholine-receptor or muscle-specific tyrosine kinase-seropositive (MuSK) antibodies. Patients with signs and symptoms that correlate with myasthenia gravis must have an electrodiagnostic study (Nerve conduction study and EMG) to confirm the diagnosis by our highly specialized and fellowship-trained neurologist such as Dr Yono and Dr Kashouty. You may need a CT scan or an MRI to check for a thymoma. You will have routine blood work as well to see if you have thyroid disease, other autoimmune diseases (such as rheumatoid arthritis or systemic lupus erythematosus), diabetes, kidney problems, or any infections.

It is treated with medications and sometimes surgery. You may be placed on a drug called pyridostigmine (Mestinon), that increases the amount of acetylcholine available to stimulate the receptors.

If you continue to have symptoms on pyridostigmine, an immunotherapeutic agent is usually added. These include prednisone, azathioprine (Imuran), mycophenolate (CellCept), and cyclosporine (Neoral) to suppress the immune system. New medication recently in the market called Soliris is also used in few selected patients.

In severe cases, you may need to have your blood sent through a special machine that removes the antibody-containing plasma and replaces it with antibody-free plasma. This is called plasmapheresis. You may also be given a preparation called intravenous immunoglobulin (IVIg) through a needle in a vein.

If you have a thymoma, you will need surgery to remove your thymus (thymectomy). In fact, your doctor may recommend that you undergo this surgery even if no tumor is present because removal of the thymus seems to improve symptoms in many patients.