Concussions in Women Can Have Lasting Effects 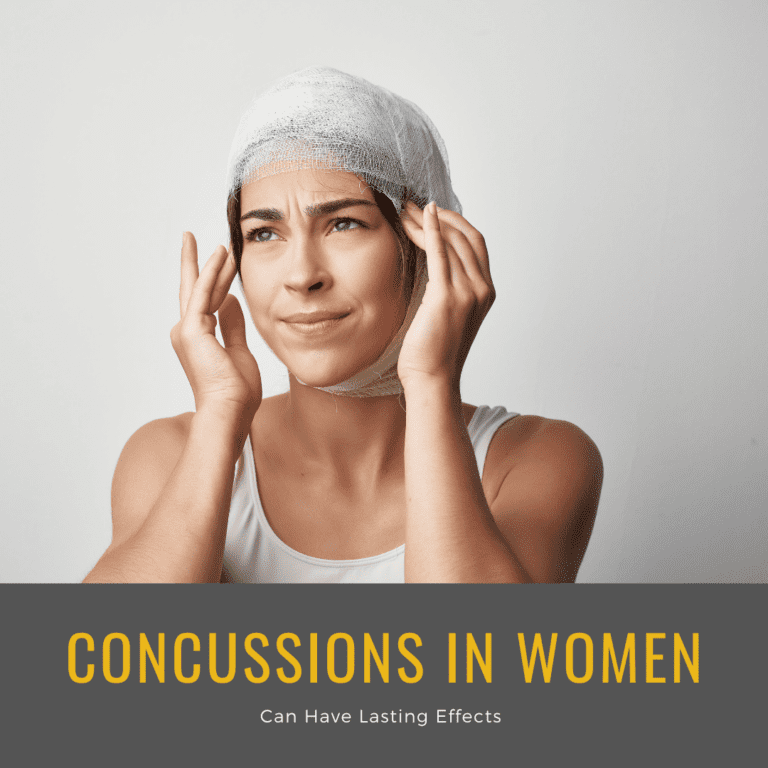 Have you ever been hit in the head? Chances are you’ve probably hit your head at some point. While not all hits to the head are problematic, some can cause a concussion. Concussions can have both short and long term effects, however a new study has found that women may be more likely to suffer from long term effects after a concussion. In this blog, we will learn more about concussions, their causes, and the way they affect the brain with an emphasis on the newly acquired data in the aforementioned study.

What is a concussion?

Concussions are a type of traumatic brain injury which is typically due to a blow or jolt to the head or body, but could be from any incident where rapid movement causes the brain to strike against the inside of your skull. Concussions are a serious and common injury that can be caused by contact sport, falls, car accidents, and many other types of incidents.

When the brain is shaken around in the skull, it can cause bleeding or bruising within the brain tissue. This damage may lead to confusion, dizziness, headaches, nausea, and vomiting. It can also result in temporary loss of consciousness and/or problems with concentration and memory.

Some symptoms of a concussion include:

Concussions are often graded by severity depending upon what is observed in the patient. There are three concussion grades:

Concussion symptoms vary from person to person and can change over time depending on a range of factors.

The Short and Long Term Effects of a Concussion

While many cases may only experience short term effects, there is concern that concussions may also cause long lasting damage. This can be the case where multiple concussions are sustained, leading to a brain disease known as chronic traumatic encephalopathy (CTE). CTE can cause changes in thinking ability and problems with behavior or emotions, which can be permanent. It is also believed that CTE can increase the risk of developing Alzheimer’s or Parkinson’s disease later in life.

Concussions and the Female Brain

As mentioned earlier, new data has begun emerging about how women are more likely than men to suffer from long term concussion effects. In a study conducted by Harvey S. Levin PhD, et al., it was determined that women may have a higher risk of long term physical and mental symptoms associated with concussions.

For the study, 2,000 patients with a mild traumatic brain injury were questioned  to determine if post acute mild traumatic brain injury symptoms differed in men and women. The participants were asked to fill out standard questionnaires on physical, mental, and emotional symptoms for over a year.  A control group of men and women with orthopedic injuries was also used to determine the recovery rate of injuries elsewhere in the body.

While men and women were found to recover at a similar rate from orthopedic injuries, it was found that women generally recovered slower from concussions. The study also found that women who had higher rates of depression and anxiety before the concussion were more likely to experience lingering symptoms.

The exact reason for this discrepancy is not yet known. However, researchers have a few theories. One is that hormones may affect recovery since the brain has receptors for estrogen. Some research has even found that women who get a concussion during a certain part of their menstrual cycle recover slower. However, more research is needed in this area to determine if this is, in fact, the case.

Concussions occur when the brain is jarred or shaken. This can be caused by a bump, blow, or jolt to the head. Concussions are often graded by severity depending upon what is observed in the patient. Concussion symptoms may vary from person to person and can change over time depending on a range of factors, including gender. The risk for long term consequences increases when multiple concussions are sustained or if there are pre-existing mental health conditions such as depression or anxiety before an injury. Recent research also indicates that concussions in women can have lasting effects, however more research needs to be done in this area to determine why female brains recover slower.