Dementia and Psychotic Behavior: What You Need to Know 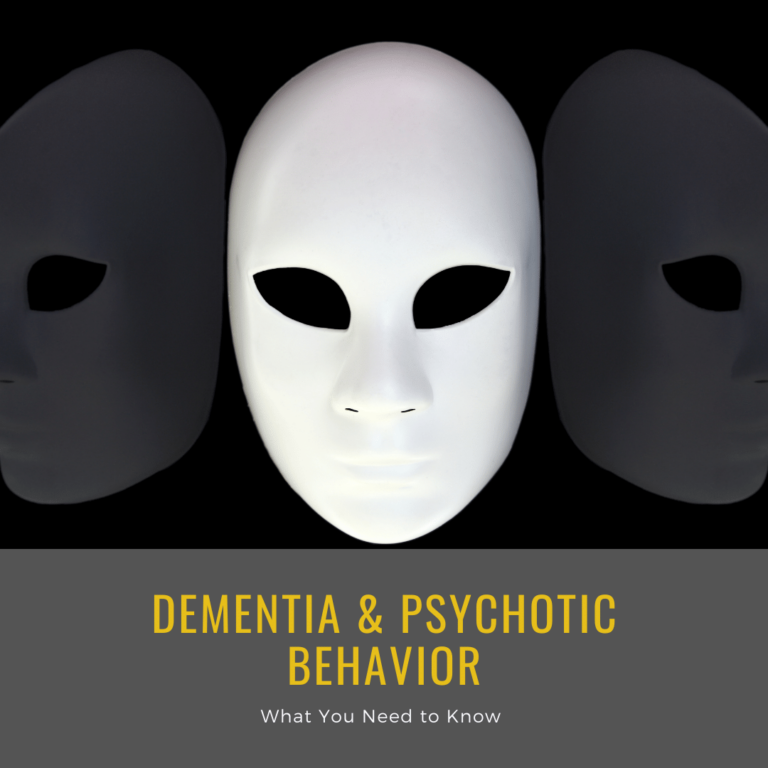 Dementia is a general term used to describe a decline in mental ability. It is characterized by the impairment of at least two brain functions such as: memory, language, problem-solving abilities, judgment, and overall thinking ability. Alzheimer’s disease is the most common type of dementia, however dementia can also be caused by a range of other conditions.

What are Psychotic Behaviors?

Unfortunately, many people with dementia are likely to experience psychotic behaviors. In fact, one study completed in 2021 estimated that 20-70% of people with dementia will experience psychosis, while another 2020 study concluded that as many as 90% of people have some time of psychological symptoms. Factors such as the type and stage of dementia, as well as other health conditions can all affect one’s individual risk of developing psychotic behaviors.

Some common psychosis symptoms seen in coordination with dementia can include:

How to Reduce Psychotic Behaviors Associated with Dementia

While there is no “one-size fits all” approach to treating dementia-related psychosis, there are a few strategies that have been shown to be effective in limiting triggers for psychotic behavior. These can include:

Having a set daily routine can help to provide structure for the person with dementia and reduce anxiety. Doing the same things at the same time everyday helps to create a sense of order and eliminates anxiety associated with uncertainty. Not only that, but having a daily routine helps people with dementia to keep track of time better. When setting a daily schedule, it is helpful to base it on the familiar, plan things out ahead of time, and keep the person engaged with the routine. At the same time, you will also need to be flexible since dementia-related behavior can be unpredictable at times.

Inevitably one part of any daily routine is mealtime. It can be helpful to provide meals and snacks at the same time everyday. Making meals simpler can also help to reduce anxiety and confusion. This means having fewer steps, using easier to open containers, and avoiding foods that require a lot of utensils. You may also want to have the person with dementia help with meal prep when possible. To avoid excess frustration, it is also recommended to not force someone to eat and to keep a few favorite foods around just in case.

Conversations with someone with dementia can be tricky. They may have difficulty following along or get confused easily. It is important to be patient, use short sentences, and avoid asking open-ended questions, since this can cause more distress. Instead, try to ask questions that require a yes or no answer. At times, you may also want to use distraction as a strategy to redirect a conversation that is becoming angry or frustrated.

Sleep is important for everyone, but it is especially important for people with dementia. Poor sleep can worsen symptoms and lead to more psychotic behavior. Unfortunately, dementia can cause “sundowning”, which can cause confusion between days and nights. To promote better sleep, it is recommended to avoid caffeine and alcohol before bed, establish a relaxing bedtime routine, and keep a consistent sleep schedule.

Physical activity can help to improve sleep, reduce stress, and increase overall well-being. It is important to find an activity that the person with dementia enjoys and is able to do. This could be something as simple as going for a walk or doing some light stretching.

Music can have a calming effect on the mind and body. It can also stimulate the left side of the brain and helps to reduce anxiety, depression, and agitation. Listening to music that is familiar and soothing is often most effective.

Medications can sometimes be prescribed to help manage psychotic symptoms. In these cases, it is important to follow instructions regarding dosage. You may also need to monitor for side effects or drastic changes that could indicate a problem with the medications. While medications will not completely eliminate symptoms, they should help to ease the severity of symptoms.

Sometimes a change of scenery can be helpful for people with dementia. This could involve taking a drive, going for a walk in a new park, or visiting a friend’s house. The key is to not overstimulate the person and to keep the outing short. It is also recommended to pick a familiar location.

For many people with dementia, their home is a source of comfort. It is important to make sure that the home environment is safe and free from potential hazards. This includes things like removing trip hazards, securing loose rugs, and keeping the home well-lit. Labeling cabinets can also be helpful.

Caring for someone with dementia can be challenging. It is important to seek out support when needed. This could involve talking to a friend or family member, joining a support group, or meeting with a counselor.