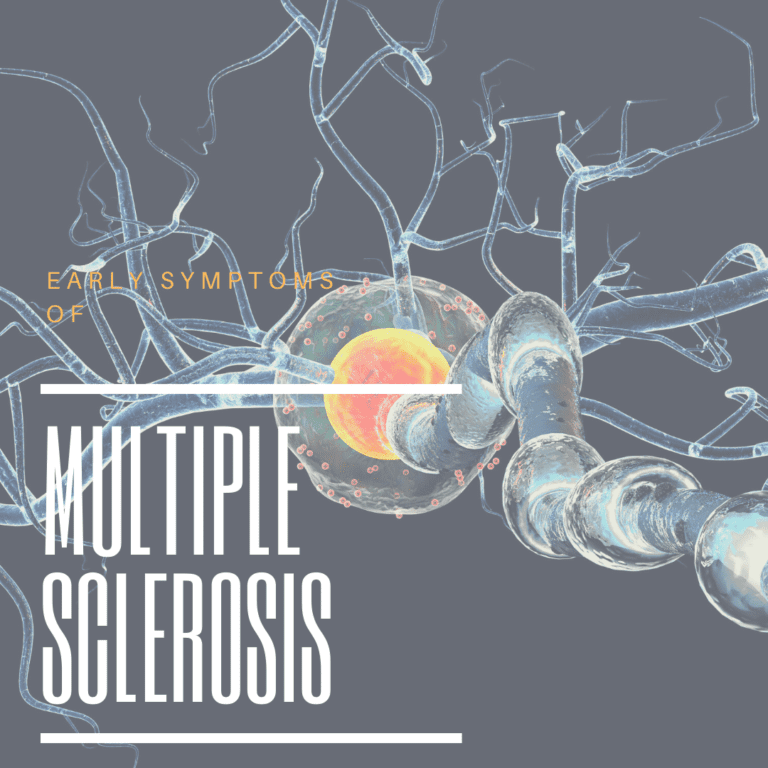 According to the National MS Society, around 1 million Americans are living with multiple sclerosis. Multiple sclerosis is an immune-mediated process, which means the body’s immune system abnormally attacks the central nervous system and its components: the brain, spinal cord, and optic nerves. Specifically, the fatty insulation that surrounds nerve fibers, known as myelin, becomes inflamed and damaged which affects the nerves ability to transmit messages.

There are four different types of MS, including:

Early symptoms of MS can include one or more of the following:

Since MS affects the optic nerve, vision problems are one of the most common early signs of MS. Vision problems that can indicate MS include: blurred vision, double vision, pain when looking to one side, and vision loss.

MS also affects the various nerves throughout the body, however some common locations where numbness or tingling is experienced are the face, fingers, arms, and legs.

Muscles in the legs and back tend to become stiff and may even spasm. In the legs, this can cause painful jerking movement. Muscle spasms can also lead to pain and stiffness in the joints.

Around 80% of people in the early stages of MS experience unexplained, sudden fatigue due to nerve deterioration in the spinal column. This can also cause feelings of weakness, especially in the legs.

Some people with MS experience feelings of dizziness and lightheadedness, which can lead to problems with balance and coordination. In some cases, people can even experience vertigo. These symptoms tend to occur when standing up from a sitting or reclined position.

Around 80% of people with MS experience problems with their bladder, however it is less common to have bowel problems. Generally speaking, bladder problems associated with MS include urinating frequently, having a strong urge to urinate, or being unable to hold urine.

MS can also cause problems with becoming aroused due to the fact that the CNS is a key structure involved in feelings of sexual arousal.

About 50% of people with MS experience cognitive problems such as memory problems, inability to stay organized, problems with language, or a short attention span.

Many people with MS also suffer from major depression. Additionally, coping with symptoms of MS can cause irritability, mood swings, and a condition known as pseudobulbar affect which causes uncontrollable bouts of crying and laughing.