Neurological Disorders Divided by the CNS or PNS 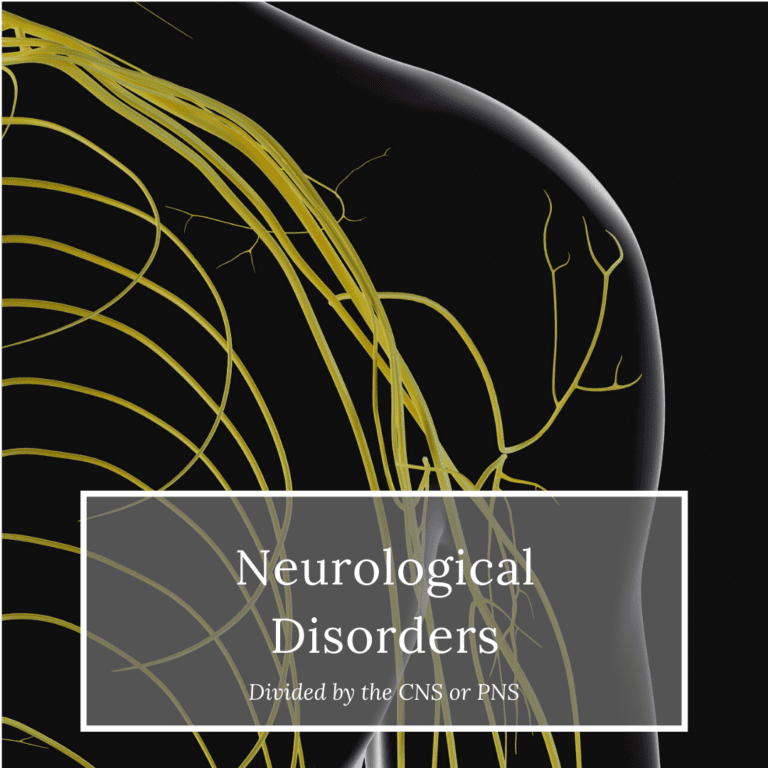 The brain is composed of the brainstem, cerebellum, and cerebral hemispheres.

Neurons are another name for nerve cells. They are found all over the body, however most neurons are found within the brain, specifically the cerebellum.

The CNS receives sensory information from the body and then initiates a response. To protect the CNS and promote proper function, it is covered in a tissue known as the meninges and submerged in cerebrospinal fluid.

Now that we know a little more about the components and function of the CNS, let’s look at some neurological disorders that can affect the CNS:

Multiple sclerosis (MS) is a demyelinating disease in which the myelin sheath which is the covering of the brain and spinal cord gets damaged. This damage disrupts the ability of parts of the nervous system to communicate, resulting in a wide range of signs and symptoms including abnormal sensation, muscle weakness, mental and sometimes psychiatric problems.

Within the peripheral nervous system, there are two components:

There are also several disorders that can affect your peripheral nervous system. These include:

A type of autoimmune disorder where the body attacks nerve cells with your PNS. This causes muscle weakness, tingling, and sometimes paralysis. This disease is rare, however it can occur after a respiratory infection, viral infection, or bacterial infections.

Peripheral Neuropathy is the deterioration of neurons in your peripheral nervous system. This can be due to a variety of different reasons, however it is most commonly associated with diabetes and exposure to toxins such as heavy metals or chemicals. Symptoms include tingling sensations, pain, numbness, muscle weakness/fatigue, and/or loss of sensation.

Radiculopathy is a disease or injury of the spinal nerve roots that causes radicular pain, weakness, numbness, and/or tingling in the arms or legs. It can occur as a result of sports injuries, heavy lifting, bad posture, or diseases that cause the spine to degenerate.

To Sum It Up