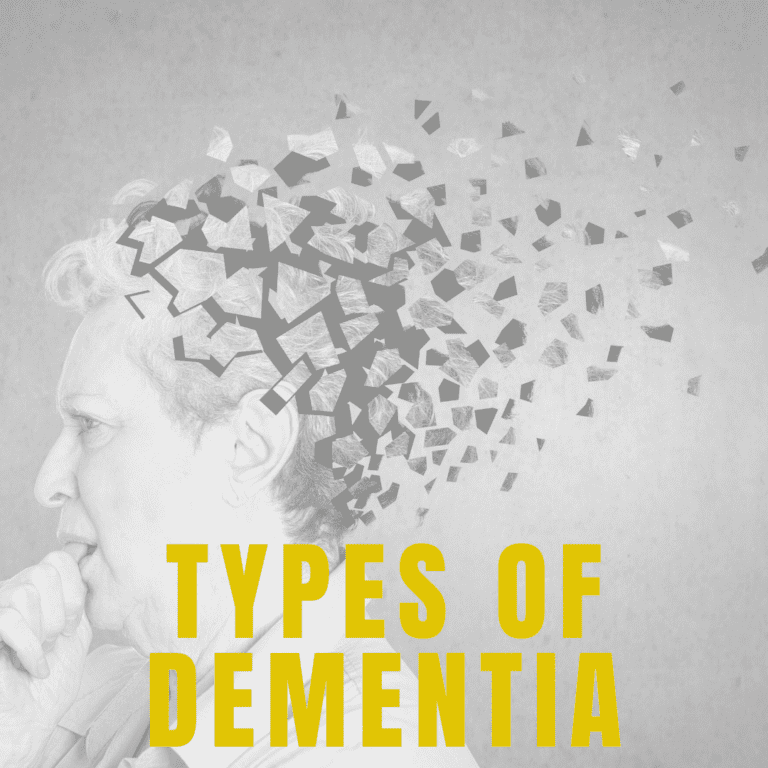 This is the most common disease associated with dementia and it accounts for 60-80% of dementia cases. Because of this, many people incorrectly assume that Alzheimer’s and dementia are synonymous. Rather, dementia is a symptom caused by Alzheimer’s that will eventually be accompanied by other symptoms such as disorientation, confusion, behavioral changes, and trouble eating, speaking, and walking.

This type of dementia progresses at a more rapid pace than other types. It occurs when prion proteins in the brain fold into an abnormal 3-D shape and destroy brain cells. Creutzfeldt-Jakob disease rapidly decreases thinking, reasoning, and involuntary muscle movements, as well as causing confusion, walking problems, and mood changes.

FTD occurs when there is progressive nerve loss in the frontal or temporal lobes of the brain. This results in a loss of function that can cause behavior or personality changes, inability to produce or understand language, and motor function disturbances. There are three subtypes of FTD depending on the part of the brain that is affected and the types of symptoms that result.

Korsakoff syndrome occurs when there is a severe deficiency of thiamine (vitamin B-1) in the body. Thiamine is used by brain cells to produce energy from sugar in order to function properly. Consequently, when there is not enough thiamine in the body, the brain cells cannot function properly and can cause problems with memory. Korsaoff syndrome is most commonly caused by excessive amounts of alcohol, but it can also be caused by AIDS, certain cancers, poor nutrition, chronic infections, and a few other conditions.

LBD is believed to be the third most common type of dementia and accounts for 5-10% dementia cases. It occurs when abnormal microscopic deposits, known as Lewy bodies, damage the brain cells. Lewy bodies are also associated with Parkinson’s disease, meaning that people with LBD may experience Parkinson’s-like symptoms such as movement problems, rigid muscles, hunched posture, and trouble walking.

NPH occurs when excess cerebrospinal fluid accumulates in the fluid-filled chambers of the brain without causing a change in pressure. It can, however, cause the chambers to enlarge and damage surrounding brain tissue. This can cause problems with walking, thinking, reasoning, and bladder control. Oftentimes, NPH is misdiagnosed as Alzheimer’s or Parkinson’s disease.

PCA occurs when the outer layer of the rear part of the brain begins to degenerate. The degeneration associated with PCA is similar to Alzheimer’s, but it occurs in a different part of the brain. Additionally, some cases of PCA produce changes similar to Lewy Body dementia and Cruetzfeldt-Jakob disease.

Vascular dementia occurs when certain conditions block or reduce blood flow to specific parts of the brain responsible for thinking and reasoning. This form of dementia can occur after a stroke or other conditions that impede regular blood flow. Vascular dementia is also sometimes referred to as vascular cognitive impairment (VCI) because of the way it can change one’s ability to think.