What to do if Someone is Having a Seizure 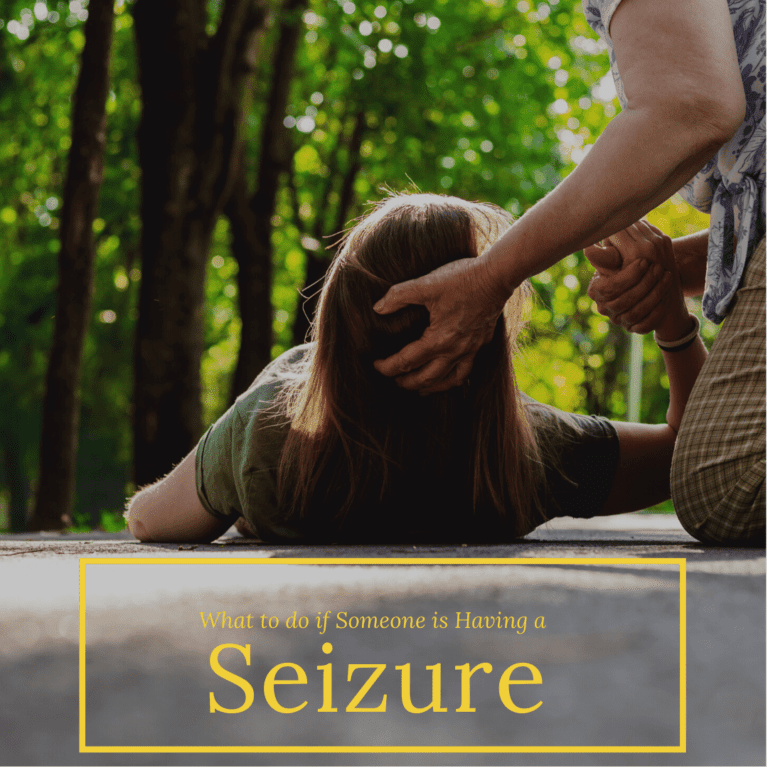 Did you know that according to the Centers for Disease Control and Prevention (CDC) an estimated 1 out of every 10 people will experience a seizure at some point during their lifetime? Being present when someone is having a seizure can be scary, especially if you want to help but don’t know what to do. Here is a brief guide on what a seizure looks like, what you should do, and when to call 911.

What is a seizure?

A seizure is uncontrolled brain activity that results in uncontrolled movements and behavior. Typically, they last between 1-3 minutes and can be characterized by any of the following:

There are two main types of seizures that you may witness. A focal onset seizure starts in a single part of the brain and is characterized by uncontrollable movements in one part of the body that an individual is aware of, but cannot stop. Although the individual will remain awake during the seizure, they may “zone out” as the seizure continues. Afterwards, they may not remember what happened. These seizures are generally not as serious as other types of seizures and usually do not require medical attention.

Some types of seizures are more serious than others and can require immediate medical attention. Here are some indications that you should call 911 immediately:

What to do During a Seizure:

Whether you are waiting for 911 to arrive or are simply trying to provide aid to a loved one with epilepsy, here are some basic guidelines for what to do during a seizure:

Stay with the Person

Since there is nothing you can do to stop the seizure, one of the best things is to simply stay with the person until the seizure ends. You may also check their arm for an epilepsy wristband or other device that may provide you with information on what to do and/or who to call. During this time, it is important to speak in a calming voice to calm the person having a seizure, as well as everyone around them. If possible, you should also time the seizure to make sure it does not exceed 5 minutes. Once the seizure is over, be sure to calmly explain what happened to the individual as they will likely have no idea what happened. It is also important to make sure that the person is breathing normally and is a normal state of awareness before you leave.

Staying with the person is also important because it allows you to help prevent them from becoming injured. When a person is having a seizure, they are unaware of their surroundings and cannot protect themselves from becoming injured. Therefore, it is the onlookers job to try and make the area as safe as possible. For starters, you can help ease them to the ground if they look like they are going to collapse. Then, remove any hazardous, hard, or sharp materials that can cause injury. You should also remove the person’s eyeglasses to prevent them from injuring the eyes or becoming broken.

After easing a seizing person to the floor, you can make things easier for them by placing them in the proper position. In most cases, turning the person on their side makes it easier for them to breathe. It also prevents them from choking since most seizures cause excess saliva production, along with a diaphragm that cannot contract. You may also need to remove ties or anything around the neck to make breathing easier. Placing something soft and flat underneath the person’s head is also recommended to avoid a head injury and maintain comfort.

What NOT to do During a Seizure: