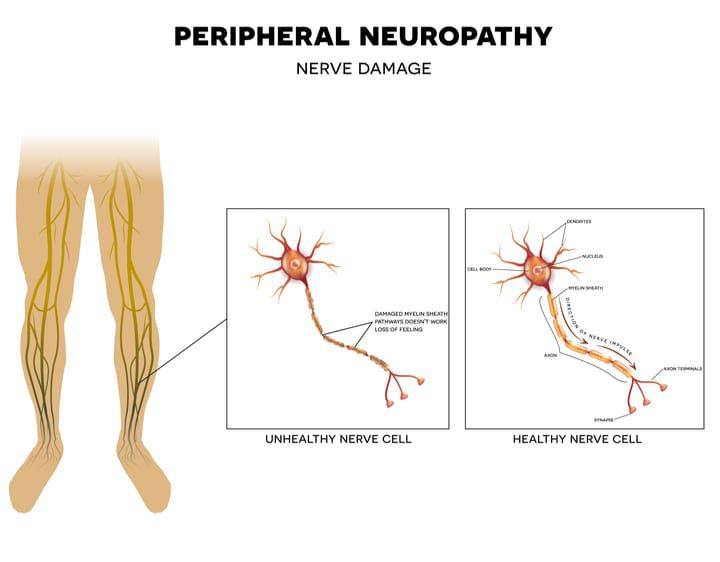 Peripheral neuropathy is a medical condition in which the nerves get damaged causing impairment of sensation, weakness of muscles or other aspects of health, depending on the type of nerve affected. Damage to nerves that supply internal organs may impair digestion, sweating, sexual function, and urination.

An estimated 25 million people in the United States have some form of peripheral neuropathy and may present in a variety of forms and follow different patterns.

Peripheral polyneuropathy may be either inherited or acquired and may have various known causes in majority of cases, including infections, autoimmune reactions, chemotherapy agents, excessive alcohol intake, and cancer. The neuropathy can be also associated with many medical conditions such as arthritis, pre-diabetes (impaired glucose tolerance), diabetes, thyroid dysfunction, nutritional deficiencies, and liver or kidney failure and many others. Environmental or industrial toxins such as lead, mercury, and arsenic can also cause peripheral neuropathy. In addition, certain insecticides and solvents have also been known to cause neuropathies.

Several genes have been found to be associated with neuropathy. Charcot-Marie-Tooth is the most common form of inherited peripheral neuropathies. The term “idiopathic” is used when there is no identifiable cause.

Symptoms vary among patients depending on which nerve fibers are affected. The nerves can be divided into sensory, motor, or autonomic fibers. Some neuropathies may affect one or two types, while others affect all three types of nerves. The classification therefore involve the type of nerve fibers affected. If the sensory fibers are affected, then it will be named as sensory neuropathy, if sensory and motor fibers are both involved, then the term sensory-motor polyneuropathy is used, and if the nerves innervating the internal organs are affected, therefore the term autonomic neuropathy will be used.

Sensory neuropathy affects the sensory nerves that transmit information such as light touch and pain sensations. Damage to the sensory nerve causes a variety and broad range of symptoms. The large sensory fibers enclosed in myelin carry information such as vibration, light touch, and positional sense in our body. Damage to those type of fibers causes impairment of light touch, resulting in tingling and numbness sensations mostly in the hands and feet and may progress proximally if left untreated or undiagnosed. There will be also loss of reflexes and positional sense causing balance and gait difficulties.

The smaller sensory fibers without myelin sheaths around them, transmit pain and temperature sensations. Damage to these fibers can diminish the ability to feel pain or changes in the skin temperature. People may fail to sense that they have been injured from a cut resulting in infection to the site of injury. Loss of pain sensation is a major concern for people with diabetes, contributing to the high rate of lower limb amputations among this population due to neuropathy. Some people also complain of neuropathic pain, which is often worse at night disrupting sleep and often is associated with an over-sensitization of pain receptors in the skin causing abnormal painful sensation from stimuli that are normally painless. For example, some may experience painful burning sensation in the feet from wearing socks or walking. This type of neuropathy is called small fiber neuropathy.

Motor neuropathy affects the motor nerves that control voluntary movement of muscles such as those used for walking, holding objects, or standing on the toes or heels. Damage to those fibers causes muscle weakness and atrophy (shrinkage).

Patients with signs and symptoms that correlate with peripheral polyneuropathy must have an electrodiagnostic study (Nerve conduction study and EMG) to confirm the diagnosis by a highly specialized and fellowship-trained neurologist as Dr Yono and Dr Kashouty. Sometimes, a skin biopsy is performed to evaluate small sensory nerve fibers in the skin.

The main therapeutic intervention in patients with small fiber neuropathy is symptomatic treatment for the neuropathic pain. Therapy is directed at both the underlying cause, if one can be identified, and at ameliorating the symptoms. Many medications can be used, standard first-line therapies such as duloxetine (Cymbalta, Lilly), pregabalin (Lyrica, Pfizer), and gabapentin (Neurontin, Pfizer) have proven useful. Additional treatment options include other anti-seizure and antidepressant medications.

Topically administered medications are another option for neuropathic pain. Two agents are that are widely used are topical lidocaine and capsaicin.

Transcutaneous electrical nerve stimulation (TENS) is also another viable non-invasive intervention used for pain relief in a range of conditions, and a number of studies have described its use for neuropathic pain. Discuss with your neurologist all options to treat and manage your symptoms.