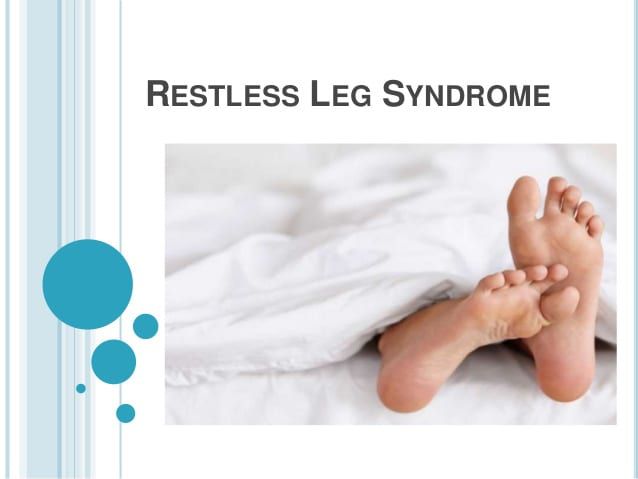 Restless leg syndrome (RLS) is a neurological disorder characterized by unpleasant sensations in the legs and an intense, and sometimes overwhelming, urge to move them for relief. Individuals affected with the disorder often describe the sensations as crawly, tingly, prickly and occasionally painful. The sensations range in severity from uncomfortable to irritating to painful. These sensations occur mainly in the legs, but it may also affect the arms less commonly. The sensations are often exacerbated (heightened) when the person is at rest laying down at night. They result in a nearly insuppressible urge to move around. Symptoms are often associated with sleep disturbances.

RLS affects about 10% of the general population of the United States. The age of onset varies greatly, but the number of people suffering from RLS increases with age, with a higher prevalence in women.

The symptoms of RLS are variable among individuals, but are all associated with unpleasant sensations in the limbs. The words used to describe these feelings are various, but include pins and needles, pulling, crawling, jittery, tingling, burning, aching, painful, itchy or electrical. They are usually not described as a muscle cramp or numbness. Most often, the sensations occur during periods of rest in the evening or at bedtime. They are characterized by an urge to get up and move. Such movements include stretching, walking, jogging or simply jiggling the legs.

The sensations and the urge can occur in any body part, the most cited location is legs, followed by arms. Some people have little or no sensation, yet still have a strong urge to move which brings immediate relief, although temporary and partial. Continuous, fast up-and-down movements of the leg and rapidly moving the legs, may momentarily relieve these sensations. Sitting or lying down (reading, plane ride, watching TV) can trigger the sensations and urge to move.

The pathogenesis of RLS remains unclear. Currently, the most widely accepted mechanism involves a genetic component, along with abnormalities in the brain dopamine pathways and impaired iron homeostasis. The most commonly associated medical condition is iron deficiency (specifically blood ferritin below 50 µg/L), which accounts for 20% of all cases of RLS. Other associated conditions include folic acid or magnesium deficiency, fibromyalgia, sleep apnea, uremia, diabetes, thyroid disease, peripheral neuropathy, Parkinson’s disease and certain autoimmune diseases such as Sjögren’s syndrome, celiac disease, and rheumatoid arthritis.

For those with mild to moderate symptoms, certain lifestyle changes and activities are necessary to reduce or eliminate symptoms. Decreased use of caffeine, alcohol, and tobacco may provide some relief. Physicians may suggest that certain individuals take supplements to correct deficiencies in iron, folate, and magnesium. Taking a hot bath, massaging the legs, or using a heating pad or ice pack may also be helpful to relieve symptoms in some patients.

Symptoms may gradually worsen with age. Nevertheless, current therapies can control the disorder, minimizing symptoms and increasing periods of restful sleep. In addition, some individuals have remissions, periods in which symptoms decrease or disappear for days, weeks, or months, although symptoms usually eventually reappear. If symptoms are too severe, your neurologist will discuss with you different medication options to help you. Medications used in the treatment of RLS include the following:

The drugs ropinirole, pramipexole, gabapentin and rotigotine have been approved by the U.S. Food and Drug Administration (FDA) for treating moderate to severe RLS. The Relaxis pad, which the person can place at the site of discomfort near their legs in bed and provides 30-minutes of vibrations as a counter-stimulation that ramp off after 30-minutes, also has been approved by the FDA.

A few drugs have been found to worsen symptoms of RLS and they should be avoided by patients exhibiting RLS symptoms. These include anti-nausea medications such as Antivert, Compazine and Phenergan. Calcium channel blockers that are often used to treat high blood pressure or heart conditions should be avoided. In addition, most anti-depressants tend to exacerbate symptoms of RLS. Finally, antihistamines such as Benadryl have been found to aggravate RLS symptoms in some people.